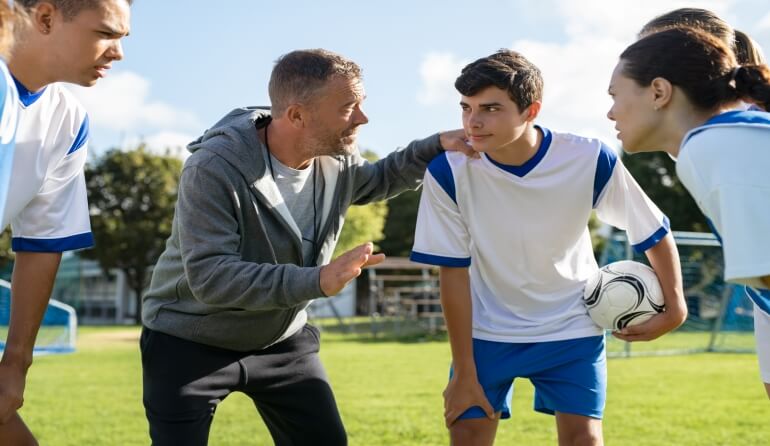 This article was originally published by Keith Whitmer. Keith is a USSF A Licensed coach who also holds his National Youth License. He has coached club soccer for over 15 years.

As a parent of two youth soccer players, this topic is particularly relevant to me.   I have observed both ends of the spectrum – coaches who say nothing during games and coaches who choreograph every single move.

I will never forget how after one game my son told me that the opposing players learned each of his teammate’s names because the coach was calling them so much!

I have seen firsthand that over-coaching during games can hurt a player’s confidence.  Read this article and let me know your thoughts.

Joysticking might help a team win more games in the short term, but at what cost?

Micromanagement is often cited as the worst trait a manager can have when working with their employees. This is no different with coaching youth sports.

There may be no sport where this issue is more prevalent than youth soccer. At the pro level, American soccer players are no less athletic than their European and South American counterparts, but they often lack the requisite soccer IQ.

This issue can be traced back to the American youth soccer experience. At the youth levels, coaching teeters on diabolical, as coaches are often telling players what to do and how to do it at all times. This phenomenon is known as “Joysticking.”

Think of Pac-Man—without you at the helm, that poor little guy would just run into a corner and get eaten by Pinky. However, with someone manning the joystick, they can make Pac-Man’s choices to avoid certain death and eat all those yummy pellets. While this is all well and good for a video game; it isn’t for youth soccer players.

Joysticking is when coaches try to play the game for their athletes, dictating all their decisions for them from the sideline. “Pass it to David!” “Dribble inside!” “Double team! Double team!” These are the types of instruction you hear from a joysticking coach.

Joysticking is a byproduct of the win-now mentality that’s become extremely prevalent in youth soccer. We live in a world of instant gratification. Parents and coaches want their kids to win every single game that they’re involved in.

At the youngest levels of the sport, this leads to a disastrous product on the field. Kids are turning to their coaches for what to do instead of their own brains or teammates.

Parents often equate constant information as coaching. You can sit on a touchline at many youth soccer games and hear the coach constantly telling their players exactly what to do. Even if this team wins the game, did they really win the game? Or did the coach win the game? Far too often, coaches are judged by parents based on wins and losses.

The buzzword thrown around by coaches and clubs is “development,” but how many of them can actually define it? True development doesn’t happen overnight, and consistently telling kids what to do is simply an abject failure.

Joysticking may lead to more wins now, but when the players who are a product of it run into players with better creativity and decision-making skills down the line, they’re going to be in big trouble.

Kids need the freedom to play, develop their soccer personalities, and learn to love the game. This will allow them to solve the problem and develop a soccer algorithm for future success.

Soccer is a sport that requires vision and the ability to read the game. Players need to experiment and figure out what does and does not work. They need to make mistakes on their own. And therein lies the problem for many joysticking youth coaches.

Since a mistake may cost their team a goal or a game, they feel they absolutely must take over and tell the player what to do. So instead of creating a teachable moment where the player is allowed to make a mistake on their own and learn from it, that golden opportunity is avoided. Goal prevented, the game won and parents happy. But with this methodology, what’s been learned by the player? Frankly, very little.

Parents often glorify the joysticking youth coach simply because they, too, care about winning above all else. They send their kids to the teams or clubs that win. We all like winning, but how does this team or club earn victories?

I believe youth soccer coaches need to get into the mindset of asking more than they’re telling. What did the player see there? What were they trying to do? Asked without criticism, these questions can help coaches gain valuable insight into what their players are thinking.

This isn’t to say coaches should be quiet like a church mouse on the sidelines. But what type of cues are most useful for development? From a simple aesthetic standpoint, a youth sports coach sees more than their players because of their height and their positioning.

The players literally do not see the field from the same perspective as the coach. Using cues or terms that take this into account can help create more intelligent soccer players. I’m a big fan of the term “check your shoulder.” I think this idea should be a cornerstone of youth development. Checking your shoulder helps a player get their eyes off the ball at their feet and see a huge swath of the field which includes areas in front of, next to, and behind them.

If the player is only staring down at their own feet, their potential decisions are really quite limited due to them not knowing where they are on the field and where teammates and opponents are in relation to themselves. But a cue like “check your shoulder” actually encourages the player to make a choice by revealing to them the options they have at their disposal. It will encourage the player to make a choice, and often, this choice will come from the skillset a player has.

Some may pass, some may dribble, but they will have made a choice. And they can learn from that. Decision-making will be different from player to player, and it’s critical for the coach to be able to understand how a player’s skillset may affect their own decisions.

I watched my daughter’s first final recently and she was so excited. They were playing a younger team that was very good. The opposing coach never sat once and was constantly telling his players what to do. In the span of two full games that day (100 minutes of action), never once did I hear “get your head up” or “what do you see?” It was all directives about what he knew needed to be done.

Perhaps the best questions parents can ask their child after a game start with “Why…” Why did you pass there? Why did you dribble there? The challenge here is seeing if the answer is anything beyond “because coach told me to.” When a coach tells the players what to do, he or she has effectively removed the stress of decisions off the players, and taken it on him or herself. No wonder college coaches are saying this generation of athletes have issues with responsibility.

“Check your shoulder” and “get your head up” should be key comments from youth soccer coaches. There is great footage of Frank Lampard as within a 15- to 20-second span, he checks his shoulders 12-13 times. It’s an effort to get a snapshot of what’s around and behind him. This will help players see their opponents, their own teammates and space; all of which are a part of informed decision-making on and off the ball.

Coaches need to encourage good choices, but the X-factor here is whether or not the coach actually knows what a good choice is. One of the biggest problems is when a coach tells a player to turn into pressure or to shoot when they neither have the angle nor clear possession of the ball. This is wrong. A player turning into pressure, trying to bulldoze his way through is success? No. It may work semi-consistently now, but once they are older, that player will lose possession every time.

A good coach can affect a game, but a great coach can change a life. Joysticking coaches may win more games in the short term, but at what cost? Your kid wants to win games, but making their own decisions and discovering the keys to success in the sport are critical for their development both in sport and in life. Decisions should belong to the player, not to the coach or parents.

Read the original article at stack.com