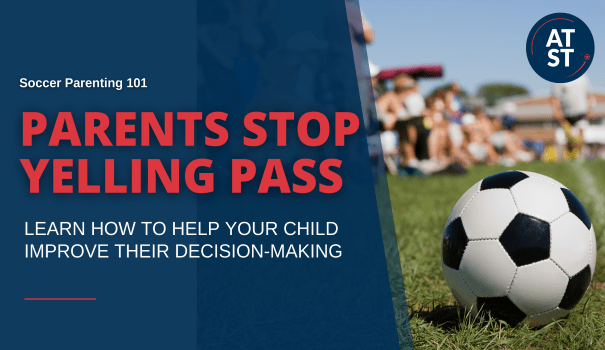 If I had a nickel for every time I heard a parent yell PASS during a youth soccer game in America; my bank account would rival that of Warren Buffett; the billionaire investment tycoon.

Does this scenario sound familiar? Your child has the ball in his/her defensive third and three defenders are approaching quickly. You see a teammate wide open so you scream PASS at the top of your lungs.

In response, (if you are lucky) your child passes the ball. No harm no foul right? Wrong!

Yelling pass, may make parents feel good, but is not developmentally helpful for the player and more importantly, it adds additional pressure to a situation that supposed to be fun.

In the past, I was just as guilty of yelling as most parents. My revelation came during a conversation with my son. While talking about what he should do if he received the ball on the wing, it dawned on me that he had no clue what the wing position was; let alone what to do with the ball.

I literally slapped my forehead realizing how foolish I had been. Yelling pass to a wide player who doesn’t know the role of a winger is just as counterproductive as yelling pass to an American football player who hasn’t been told that he is the quarterback.

Similar logic applies in soccer, but it is not always obvious because the positions are more fluid.

In this post, I will offer a better approach.

It Starts with Your Child Understanding the Importance of Space

Scoring chances are the the rewards that result from advancing the ball and bodies into space.

A Simple Framework for Getting the Ball Into Open Space

Warning, this next statement is considered controversial in many coaching circles, but it’s common sense everywhere else:  Even in the most complex games, there are situations that are both frequent and have proven solutions.  I liken it to “looking both ways before crossing the street”.

Crossing a potentially dangerous street is frequent yet has an effective solution.  Hence, I don’t want a person wasting time discovering that looking both ways makes the task of crossing the street safer.

The same applies to finding space in soccer.  To avoid overwhelming my son, I taught him a few very simple rules that are the foundation for all offensive decisions he will ever make.

The primary job of an offensive player is to get the ball or their bodies into open space. That’s it; yes, it’s really that simple.

If there is no open space wide or in the middle, then there is definitely open space behind.

Excluding the goalie, there are only two ways for players to move the ball; dribbling and passing. With these rules, my son now understands WHY he passes and WHY he dribbles.

He dribbles and passes in order to find open space (Period). With this understanding, his offensive decision-making improved drastically.

Now, he consistently crosses the ball into the box. Only a few months ago, he would try to dribble past several defenders until he ran out of bounds.

I didn’t teach him the skill of crossing specifically. Instead, he is relying on the logic of the rules. He knows that if he has the ball wide his job is to get it into the middle where the open space is and vice versa.

Parents also marvel at his ability to make such quick passes at such a young age. It’s as if he is two steps ahead of the other kids.  This didn’t happen overnight, but now it’s simple to him.

He received the ball, in the middle, and according to Rule #2, his first instinct is to get the ball back wide.

This is where the player’s creativity lies. There are an infinite amount of choices that a player has to make when they have time and space on the ball. What they do is totally up to the situation and the player.

As a parent, our job is to sit back and enjoy the action unfolding; regardless of the outcome.

Moving Without the Ball

This framework also gives the player a reason to move. They should deliberately be trying to get into space; not moving just to be moving. And they should certainly not be standing beside a defender which is so often the case at the youth level.

It’s fine. Once they understand their role and the importance of space; the rest relies on their ability to execute which will come with practice.

What about Creativity and Decision Making

This framework served as offensive decision-making training wheels for my son. A great analogy is in cycling; when teaching a child to ride, you wouldn’t start by pushing them downhill on a 10-speed bike. However, soon they will grow out of the training wheels and start doing stunts on their own.