7 Steps to Improving Your Weak Foot 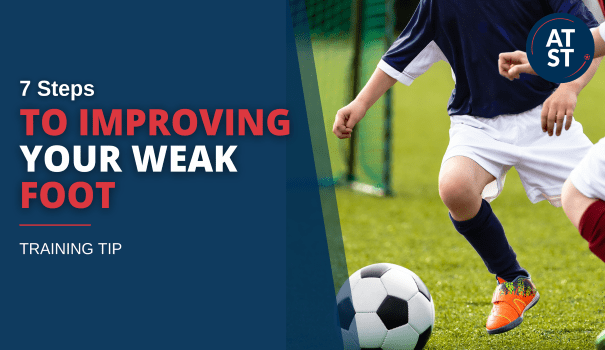 You have seen it a million times.  A youth soccer player misses a golden scoring opportunity simply because they didn’t have the confidence and skill to use their weak foot.

Soccer is a fast-paced game that is played at 360 degrees.  This means one-footed players lose the ball more, have fewer options, and create fewer chances.

Once defenders learn that a player is one-footed, they position themselves to force that player onto their weak foot – causing those players to lose the ball or become ineffective. A two-footed soccer player, on the other hand, is able to dribble, pass, shoot and control the ball almost equally with both feet.

The good news is that you can drastically improve your weak foot starting today by following the following seven steps.

First introduced by Dr. Carol Dweck of Stanford University, a growth mindset means that you thrive on challenges, and don’t see failure as a way to describe yourself but as a springboard for growth and development of your abilities.

In a soccer context, this means that you believe that you can develop your weak foot and that your current situation can be improved upon with practice.  It also means that you understand that at times the process may be difficult and feel awkward, but are willing to do what’s required to improve.

Believing in yourself and your ability to improve is the first step to achieving any goal; especially in sports.

Parent Tip: My sons and I do a five-minute juggling routine (using Anytime Soccer Training) before every practice and game.  The results have been amazing.

The irony, however, is that being consistent is more important than the length of time per session.  Spending two to five minutes consistently juggling will result in drastic improvement over time.

An issue that many young players face is that they start too fast and become frustrated. This leads to many of them giving up.

Start with simple goals that are achievable and, while you want to challenge yourself at times, the best results come from following progressions that slowly become more difficult over time.

Pro Tip: Make it a game or challenge. See how many juggles you can get in 30 seconds. Track it and challenge yourself every day.

While drills are important, playing 1v1 is fun and can help you improve your weak foot.  When playing with younger friends you will have more time on the ball and less pressure. Use this opportunity to challenge yourself to use your weak foot and score from both sides. Parent Tip: The best way to get your child practicing with their weak foot is by playing 1v1 against them.  Simply guard the side of the stronger foot directing them to their weak foot. Give them time on the ball, but add some pressure to make it challenging and realistic.

Rebounder passing drills are a great way to improve first touch and passing accuracy with your weaker foot. They also promote creativity and experimentation because the wall doesn’t judge or give negative feedback.

Rebounder passing drills also force you to constantly correct your technique. To be successful, the wall requires that the pass has the perfect weight and angle.  You are not limited to just passing either; you can use the wall to combine receiving, dribbling, and 1v1 moves.

#5 Decide to Use Your Weak Foot In Practice

I created a simple rule for my sons and the kids I train one-on-one.

Pro Tip: During team training, when given a choice, use your weak foot Most team practices begin with a warmup that includes passing and/or dribbling.  More often than not, there is no requirement to use a particular foot.

It may sound obvious but most players just don’t spend enough time manipulating the ball with their weak foot.

Many players and even coaches believe that unopposed ball mastery and dribbling are not useful because they don’t appear game-like.

This could not be further from the truth.  Practicing these skills trains your mind and body to recall them when needed.  There are thousands of dribbling and ball mastery drills included in the Anytime Soccer Training program and they all are 100% follow-along.

Pro Tip: Use both feet and all parts of your feet; especially the sole.

Becoming two-footed will lead to more goals.  Being accurate with both feet will lead to even more.  It’s during the crucial moments after you have been going one way all game that you are able to shock your opponents with a clinical finish using your weak foot. Adding targets, a keeper and pressure will replicate that moment.  There are no magic tricks to shooting. Keep doing it over and over again until your shots become accurate and they feel natural.

Start with setting up targets and then invite a goalkeeper friend.  Shoot from all angles incorporating finishing and dribbling.

Pro Tip: Bring dozens of soccer balls so that you can get a lot of reps in without wasting time constantly collecting balls.

Did you know that Anytime Soccer Training has over 5,000 training sessions?

The program includes all the drills listed above and more.  It’s free to join and every session is 100% follow-along.