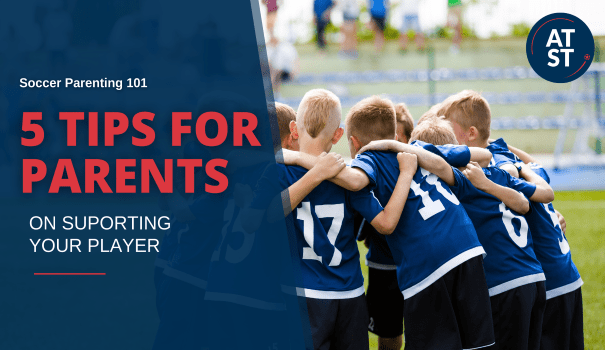 This article was written by Sean Yohe and originally published by the Ogden Soccer Club.

Every year, new families join the soccer community. Every year, new players begin their journey eager to learn and take on the world. And every year, many parents from these families say the same thing:

“I don’t really know that much about soccer. I just want my kid to have fun.”

Whether you’re a first-time soccer parent or you’ve been around for years, finding positive ways to engage and support your players’ growth can be a challenge for all parents. In this article, I’ll take aim at several of the challenges commonly facing new soccer parents.

Not sure if you’re helping your child’s development or even how to begin? We’ve Got Your Back!

This is probably the most common worry many soccer parents face. It can be incredibly daunting and, unfortunately, there are coaches and clubs out there who are very convincing but don’t actually know any better themselves.

So what can you do? How can you spot the difference between a genuinely player-centered coach/club and the many pretenders?

Here are 5 things to know:

1. What does “player-centered” mean?

Everything is about the players. Coaches still coach but they’re not the stars of the show. Instead, coaches become facilitators providing players with opportunities to learn through fun and focused play with minimal downtime or lines.

Wins and losses are secondary to the development of skill on the ball and giving players the chance to experience the game from every position/perspective possible. I’m not saying competition isn’t important. I am, however, saying that it doesn’t matter how many games a 9-year-old wins if they aren’t developing skills.

Set-piece throw-ins, running faster, and kicking the ball harder will mean less and less every year as the competition grows.

A player-centered environment helps players grow toward their goals and fosters competitiveness without allowing wins or losses to become the headline.

This is the million-dollar question and where so many of us get lost or fooled. Firstly, here’s what development is NOT: a straight line. It should trend generally upward but will be filled with peaks and valleys that may last entire seasons or only a few weeks, following no particular pattern.

Instead, positive development in soccer players can be seen in things like their ability to dribble the ball at speed while keeping it so close that they touch it with every step. It’s the ability to control the ball with all the surfaces of the foot.

It’s gaining the confidence and composure to control a ball with their first touch instead of immediately smashing it toward the other team’s half. It’s in the way they begin to recognize patterns in the game and anticipate the action.

It’s the confidence a shy child finds to shout loudly, demanding the ball. Unlike being naturally fast at age 10, development is learning and refining skills.

3. How to spot a truly development-oriented coach/club.

Every coach/club will tell you that they’re focused on development and many will have great pitches prepared. Unfortunately, entirely too many of them are just saying what they know you want to hear.

Even if you’ve never played soccer, there are questions you can ask and signs you can look for that will help you sort it all out. A great question to ask is how they handle playing time.

Avoid any coach/club who makes players “earn” time on the field through performance.

Under the age of 16, they’re only treating kids like professionals and robbing them of one of the most important elements of their development: games.

If development isn’t linear, you need a steady process. Fluctuating game time or being in and out of the coach’s good graces do not fit the bill.

Also, ask them about their style of play. There’s nothing wrong with youth teams scoring on breakaways or shots from 20+ yards out but it should only be a small part of their offense.

Otherwise, we’re just teaching kids to “boot it” every time they get a chance at the expense of learning to control the ball.

Development is about players growing through challenges and gaining new skills. Don’t be fooled by raw athleticism or win/loss ratios.

Your cheering plays a major role in the growth of your player. Instead of shouting things like “boot it!” or “shoot!” though, avoid specific commands and cheer for positive player actions.

Some examples of that might be to cheer when a player shows composure and skill on the ball under pressure. Praise positive actions and intent, even when the execution falters.

If you’re not sure what “positive actions and intent” are, ask your player’s coach what he/she has asked the team to do and cheer for those things.

Above all else, avoid negativity and giving instructions to the players.

They might seem lost and frozen at times but, if development is the goal, we can only make it harder by interfering. Be positive and let them experience the game with you as their safety net.

5. How anyone can help their kids develop at home.

Play with them and encourage them to play with friends. Don’t worry about being good at it. It doesn’t matter how much you know.

Just play with them and enjoy the moment. The joy that comes from just playing is a source of growth and motivation that no coach or club can equal (even though we aspire to).

Thank you for being part of our community. You mean the world to us!