The Game is the Greatest Teacher (True/False) 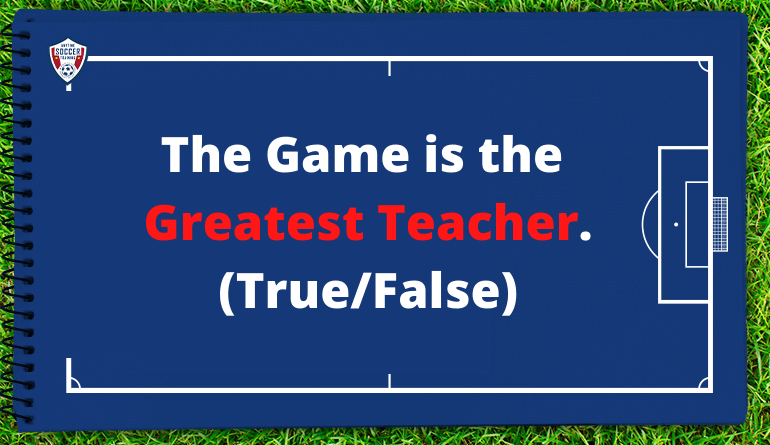 Is the game the greatest teacher?  I asked this question to thousands of coaches, trainers, and parents in our Youth Soccer Coach Facebook group.

Yes, but good coaches find the small moments in-game situations to teach. Too many young coaches use this as an excuse to say very little.

I can play guitar. But if a teacher teaches me the scales then I will better and definitely learn quicker.

I can drill until I’m blue in the face, but cones and poles don’t react back…in the game, you notice the spacing, you are forced to notice tendencies and develop that individual confidence.

My Thoughts – I think the answer lies somewhere in the middle and to a certain extent depends on the player’s age, competitive level, and how we choose to define the game.

In essence, there are lessons that can only be learned during games, but players acquire the necessary skills during practice.

As well as having fun, it’s extremely important that youth players become proficient in basic skills.

Unfortunately, the converse is also true. Players who lack basic skills, tend to get less from the games than others.

I discussed the relationship between skill acquisition and games in a recent blog post entitled The #1 Reason Ball Mastery is So Important.  In that article, I argued that technical players have more fun because they have the ball more and are more confident.  This creates a self-fulfilling prophecy of greater enjoyment and more willingness to train that lasts the entire time the player plays soccer.

I believe that many parents and coaches wrongly lump “play” with the technique of a coach creating game-like conditions in order to promote decision-making among players.

In other words, the game is only the best teacher if it is structured is to do so. Otherwise, the kids are running around like chickens with their heads cut off!

That doesn’t mean, that playing games don’t have intrinsic value – because it does. The mere fact that kids are having fun is normally enough.

However, I think we should make a distinction between playing a game (as it’s commonly understood when playing outside competition) and using game-like conditions to promote decision-making and problem-solving. The latter is where coaches add the most value. What do you think?