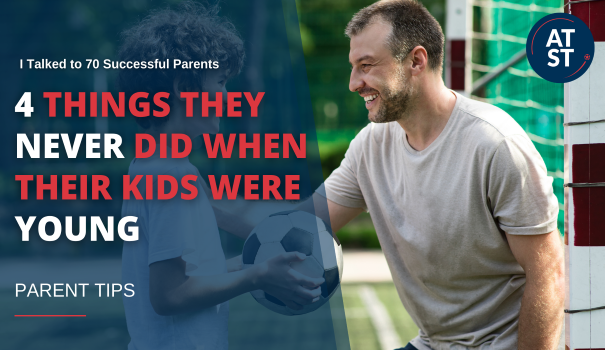 As a parent of competitive youth soccer players, I actively train my two sons in addition to their team training.  Throughout their lives, I have used this time to pass on other valuable life lessons that go beyond the soccer field.

As such, I give a lot of thought to my approach to parenting. I often have more questions than answers.

Tough questions like these led me on a journey of self-reflection, research, and countless conversations with other parents and coaches.

That was the inspiration for creating the Anytime Soccer Training Parents, Coaches, and Players Facebook Group and the Inside Scoop podcast.

My goal is to nurture a positive community where parents can find support, exchange ideas and share some best practices.

It’s in that vein, I am sharing the article I Talked to 70 Parents Who Raised Highly Successful Adults — Here are 4 Things They Never Did When their Kids Were Young.

Originally published on the Make It CNBC blog, below is an excerpt written by Margot Machol Bisnow.

As I researched and wrote my book, “Raising an Entrepreneur,” I interviewed 70 parents who raised highly successful adults about how they helped their children achieve their dreams.

Despite the diverse ethnic, socioeconomic, and religious backgrounds, there were four things that the parents of these smart, driven, and entrepreneurial individuals never did when their kids were young:

1. They never treated their kid’s hobby as a waste of time.

Sports, video games, debating, music, birdwatching — every child of the parents I spoke to had a passion outside of the classroom.

The parents never veered their kids away from the hobby because they knew it was keeping them mentally active.

Radha Agrawal is the founder of Daybreaker, a global morning dance movement with over 500,000 community members in 30 cities around the world.

Previously, she was the CEO of Super Sprowtz, a children’s entertainment movement focused on healthy eating.

But growing up, her passion was soccer. With support from her parents, she and her twin sister Miki played three hours a day, starting from when they were five years old.

Eventually, they played at Cornell University, where they were known as the “Legendary Soccer Twins.”

Although her career today was nothing to do with soccer, Radha told me that she developed a lot of grit and resilience from the sport:

“You have to be disciplined. You learn to be organized and focused. And you learn the politics of teamwork, and what it takes to be the captain.”

2. They never made all the choices for their kids.

It can be extremely tempting to constantly make decisions for your kids. After all, you’re the adult — you know your children better than anyone else does, and you don’t want them to suffer.

But successful parents resist that temptation.

Ellen Gustafson co-founded FEED Projects, providing food in schools for children. Today, she is a thought leader and regular speaker on social innovation.

Her mother Maura said to me: “We encouraged her to be independent and to think for herself. I’d tell her, ‘Trust but verify. Check it out. Be sure it’s true. Don’t drink the Kool-Aid.

Just because everyone else is doing it, that doesn’t mean you have to.’ You want your kid to grow up to be cautious, but not fearful.”

“As a parent, you can see what their strengths are,” she continued. “But you have to let them figure it out. The best way to do that is by asking questions like, ‘What choice do you think would be more helpful to you in the future?’”

3. They never prized money or high-paying degrees over happiness.

I have nothing against academic and professional degrees — my husband and I both have graduate degrees, and it has worked for us.

But a degree may represent an expensive waste of your child’s time if it has no connection to their interests. And if their only reason for being in school is to get the piece of paper or make the contacts needed to land a high-paying job.

Someone who loves something enough and works hard at it will find a way to turn it into a living, even without a degree in that field. And they won’t be afraid to tackle an opportunity that won’t pay anything for a few years as they might be if they had to pay off high student debt every month.

A final note about money: Although the parents I spoke to never pushed their kids toward pursuing a high-paying job, all of them made an effort to teach their kids about money in one form or another.

Joel Holland sold half of his first company, Storyblocks, for $10 million in 2012. He acquired a strong work ethic at an early age; he and his sister were given the job of sweeping to get their allowance.

“The floors had to be clean enough to eat off of. It taught me about hard work,” he said. “And in grade school, everyone had roller skates, but my parents wouldn’t buy them for me. They told me, ‘If you want them, you have to save your money.’ It made me angry at the time, but it really made me appreciate the value of money.”

His parents also didn’t pay for his college education. Joel went to Babson College on student loans and from the money, he made from working.

“Because I paid for college, I never missed a class. I’d calculated the cost of each class at $500,” he said. “If I was tempted to skip a class, I always thought there is nothing I could possibly do during this hour that’s worth more than $500.”

I love Joel’s story because it illustrates why you shouldn’t teach kids that they must go after high-paying careers, but that it is important to learn about money.

If you’re passionate about something, and get really good at it, and get to know it inside and out, you will see something that’s missing, which you can turn into your business. Joel has done this twice.